Litecoin (LTC/USD) eyes a bullish breakout. Why buyers should keep their fingers crossed

Litecoin (LTC/USD) is once again looking at a possible breakout above a key resistance zone at $64. The price surged strongly to this key level after initially testing a low of $47 two days ago. Bulls are now under test at this key level as bears also stand their ground.

It’s an 11-year birthday for Litecoin. Its developers celebrated the blockchain, which was forked out of Bitcoin to address the shortcomings of the latter. More than a decade later, Litecoin has remained resilient, although price dynamics have hurt it more often than not. Litecoin Foundation says the blockchain has processed more than 33 million transactions without any challenge so far.

As the digitalisation of money takes shape, LTC will surely have a core role to play. The team behind the blockchain says that in the last 11 months, over 45 million new LTC addresses have been created. The number is equal to about 28% of lifetime LTC addresses. Equally, Litecoin’s mining difficulty hit a new milestone at slightly below 18 million hashes. The difficulty implies that miners are competing intensively for mining rewards.

Buyers would really pray that LTC clears $64 amid the positive developments. Two possibilities are likely, from the price action.

LTC corrects slightly below the $64 resistance 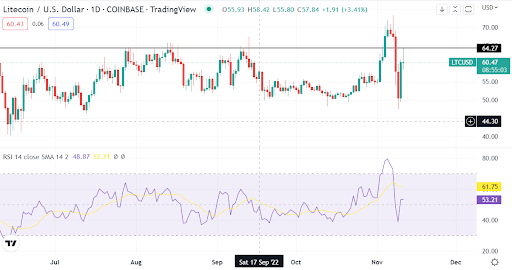 Price action indicators show a mixed outlook for LTC. On the one hand, an uptick in price and recovery from an RSI reading of 39 suggests a potential bullish market.

On the contrary, LTC has slowed down since hitting the resistance at $64. A breakout is far from being confirmed, so we should still hold a bearish bias.

When should you buy Litecoin?

A break above the $64 resistance would make the LTC price attractive to buyers. The resistance is a key zone that has held LTC since June. Thus, a breakout could welcome a huge move for the cryptocurrency.

LTC could proceed lower if the breakout fails, with the next potential bottom lying at $50. Investors should keep watch of both scenarios before buying.

Where to buy LTC

Bitstamp is a fully regulated company which offers users an intuitive interface, a high degree of security for your digital assets, excellent customer support and multiple withdrawal methods.

Keep an eye out for major company NFT trademark filings this…